HIGHLIGHTS
FLEM identify multiple conductors 2.5km north of the Eastmain Mine at Placer Lake
Conductors extend over strike length of approximately 2km and coincident with historical rock chip samples of 8.3g/t gold at surface and untested by drilling
Total strike length of conductors exceeds 6km highlighting the potential scale of the district
In excess of 130 FLEM and DHEM modelled conductors have been identified by Benz Mining
Placer Lake conductors will be tested as part of ongoing 50km fully funded drill program
2 drill rigs currently on-site drilling over 1,000m of core per week
Additional FLEM survey underway covering another 3km of prospective strike to the west of Loop F
Toronto, Ontario--( May 26, 2021) - Benz Mining Corp. (TSXV: BZ) (ASX: BNZ) (the Company or Benz) is pleased to provide an update on the results of the latest Fixed Loop Electromagnetic (FLEM) surveys completed to date. FLEM surveys were recently completed to the north of the Eastmain Mine in an area surrounding Placer Lake prospect. FLEM Loop F has returned positive responses significantly expanding the potential footprint of the Eastmain project to the north into an area with sparse drilling that has not tested the FLEM conductors. 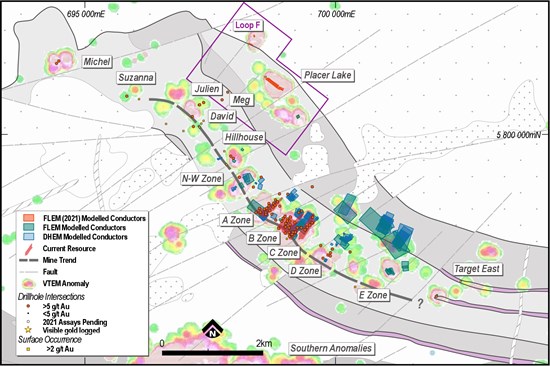 "The results from our electromagnetic surveys continue to deliver beyond all expectations on the Eastmain Gold Project. Since commencing our surveys less than 9 months ago, we have now identified in excess of 130 Fixed Loop and Down Hole modelled plates over a strike length of 6km, with several of these new conductors drilled discovering new gold bearing zones. Our exploration concept and methodology continue to show that this system has the potential to be significantly larger than the currently identified resource suggests and what was previously believed to have existed at Eastmain.

"We look forward to the continued work being done as part of our 50km fully funded drill program for 2021."

FLEM Loop F identified several FLEM conductors in the Placer Lake area. The prospect is located 2.5km from the Eastmain Mine on a parallel litho-structural trend.

The location of the newly defined conductors coincides with airborne VTEM anomalies identified from the survey flown in 2005. 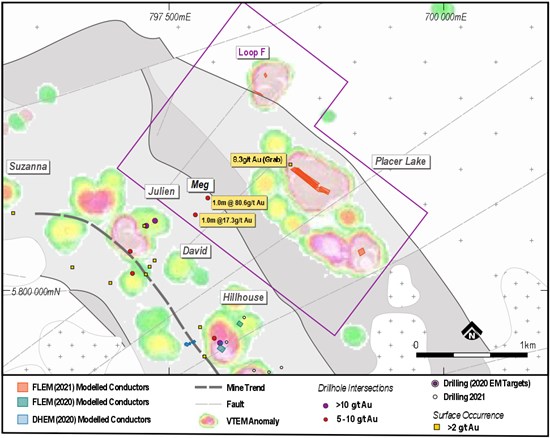 Several FLEM plates were modelled and are recognised in three main areas within this grid. There are only 2 historical holes drilled in the central area, however, these holes did not test the FLEM plates. High grade gold has been identified in the area with rock chips up to 8.3g/t gold above the conductors. The other FLEM anomalies further west and east have not been drilled. The modelled EM plates are shallow and show a steeper dip to the NE compared to the FLEM conductors found in the southern part of the Eastmain project.

Ongoing work programs including mapping, soil surveys, surface sampling and drilling at Placer Lake will continue as part of the fully funded 50km drill program for 2021.

The Eastmain Gold Project, situated on the Upper Eastmain Greenstone Belt in Quebec, Canada, currently hosts a NI 43-101 and JORC (2012) compliant resource of 376,000oz at 7.9gpt gold (Indicated: 236,500oz at 8.2g/t gold, Inferred: 139,300oz at 7.5g/t gold). The existing gold mineralization is associated with 15-20% semi-massive to massive pyrrhotite, pyrite and chalcopyrite in highly deformed and altered rocks making it amenable to detection using electromagnetic techniques. Multiple gold occurrences have been identified by previous explorers over a 10km long zone along strike from the Eastmain Mine with very limited but highly encouraging testing outside the existing resource area.

This press release was prepared under supervision and approved by Dr. Danielle Giovenazzo, P.Geo, acting as Benz's qualified person under National Instrument 43-101.

Benz Mining Corp. brings together an experienced team of geoscientists and finance professionals with a focused strategy to acquire and develop mineral projects with an emphasis on safe, low risk jurisdictions favourable to mining development. Benz is earning a 100% interest in the former producing high grade Eastmain gold mine, Ruby Hill West and Ruby Hill East projects in Northern Quebec.

On behalf of the Board of Directors of Benz Mining Corp. Xavier Braud, CEO

Competent Person's Statements: The information in this report that relates to Exploration Results is based on and fairly represents information and supporting information compiled by Mr Xavier Braud, who is a member of the Australian Institute of Geoscientists (AIG membership ID:6963). Mr Braud is a consultant to the Company and has sufficient experience in the style of mineralization and type of deposits under consideration and qualifies as a Competent Person as defined in the 2012 edition of the "Australasian Code for Reporting of Exploration Results, Mineral Resources and Ore Reserves". Mr Braud holds securities in Benz Mining Corp and consents to the inclusion of all technical statements based on his information in the form and context in which they appear.

(Criteria in this section apply to all succeeding sections.)

(Criteria listed in the preceding section also apply to this section.)