Confirmation of high-grade gold mineralization in the west Red Lake area, a region historically under-explored, showing Red Lake-style gold mineralization
Hole NT20-169 intersected 15.41 g/t gold (Au) over 7.05m, starting at 226m downhole in the Newman Todd Zone in geology favourable for hosting high-grade gold mineralization
Hole NT20-167 intersected 8.63 g/t Au over 6.55m
Ongoing testing of mineralized and structural controls to expand previously known areas of mineralization
First drilling and batch of assays (since 2013) from the phase one drill program
VANCOUVER, BC, Oct. 6, 2020 - Trillium Gold Mines Inc. (TSXV: TGM) ("Trillium" or the "Company") is very pleased to report that assay results have been received from the first four holes of its recent 3,186 metre drill program on the Newman Todd Property. The early success of the program, prior to the receipt of the assays for the remaining holes has provided enough encouragement to restart drilling, expected to commence shortly.

"These new intersections on the Newman Todd Zone have confirmed high–grade gold mineralization over significant widths, including 15.41 g/t Au over 7.05 m" says William Paterson, Trillium Gold's VP of Exploration, "We have been focusing on refining the structural and mineralization controls in the region and were able to validate a hypothesis based on the reinterpretation of the structural model with the drill results to date. Previously, the west end of the Red Lake greenstone belt had been considered to be less prospective with the absence of the Red Lake mine-hosting Balmer volcanic rocks, however we have since confirmed high-grade gold in this area. We will continue to explore in the west end and test the strike and down-dip potential for additional gold mineralization", Mr. Paterson continued.

Russell Starr, CEO of Trillium Gold comments "These initial drill intersections at the Newman Todd Zone are highly encouraging. The potential for Newman Todd to host additional high-grade mineralization is very exciting given we are surrounded by several producing and past producing mines in one of the most prolific gold camps located in Red Lake (and the world). These results highlight the significant potential of our exploration program on the Newman Todd target that has not undergone any drilling since 2013. By drilling perpendicular to, and in the opposite direction from the majority of historical drilling, we have intersected meaningful high-grade gold mineralization over substantial widths, a major success for Trillium shareholders."

The Newman Todd Zone is currently a 2.2 km long and up to 200m wide structural target which is part of the Red Lake Gold Camp. The drill results in Table 1 below are complete results from the first four of nine drill holes in our phase one drill program, the first since 2013. Assays are pending for the remaining five holes. Drilling from 2013 and earlier had mostly focused on testing the zone by targeting the footwall by drilling to the southeast, potentially undercutting much of the targeted zone. Newman Todd is a highly prospective target with 41% of the 165 historic drill holes having intervals of greater than 10 g/t gold over various lengths. In addition, nearly all drilling has been to depths less than 400m. The Red Lake Camp is famously known for high grade gold mineralization at depth with Evolution Mining's Red Lake Gold Mine currently reaching depths of several thousands of feet. Trillium will continue to test various drill orientations in order to develop a comprehensive understanding of the mineralization and structural controls and test the depth potential of the Newman Todd Zone. Figure 1 below shows the location of the Newman Todd Zone as well as its relative location to the producing and past producing mines within the Red Lake Camp. 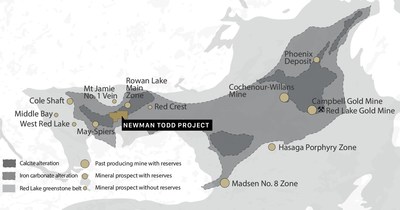 Hole NT20-168 intersected the NT Zone mineralization at an approximate depth of 475m to 536m downhole. This hole was intermittently mineralized, at greater than 100ppb Au, from 90m down hole to 624m. This hole intersected 1.60 g/t Au over 6.00m from 506.00m. Four composite intervals with gold grades above 0.50 g/t Au were intersected on the hangingwall (south east) side of the NT Zone.

Hole NT20-169 was designed to test the shallow sediments in the hangingwall of the NT Zone, and extended to target the NT Zone. This hole was drilled from the opposite direction of most holes drilled into the NT Zone. It returned four significant composite intercepts, including 0.97 g/t Au over 2.55m from 137.7m in a chert breccia with pyrite-magnetite iron formation, the original target of the hole. At the contact between the NT Zone and the bounding felsic unit on the footwall, a 15.41 g/t Au zone over 7.05m was intersected from 226m, with visible gold specks noted in 2 intervals after subsequent review of the core.

All drilling was supervised by Paul Barc, PGeo. Drill core is logged and sampled in a secure core facility on site. Core samples from the program are cut in half, using a diamond cutting saw, and half cores are sent for analysis to the SGS Laboratory in Red Lake, ON, an accredited mineral analysis laboratory. All samples are analysed for gold using standard Fire Assay-AA techniques. Samples returning over 10.0 g/t gold are analysed utilizing standard Fire Assay-Gravimetric methods. Duplicate assays of approximately 5% of the samples are also obtained from the coarse reject of the original sample. Selected samples with results greater than one ounce per ton gold are also analyzed with a standard 1 kg metallic screen fire assay. Certified gold reference standards and blanks are routinely inserted into the sample stream, as part of Trillium Gold's quality control/quality assurance program (QAQC). No QAQC issues were noted with the results reported herein. All drill intercepts reported are down-hole core lengths.

On behalf of the Board of Directors,

This news release contains forward-looking information, which involves known and unknown risks, uncertainties and other factors that may cause actual events to differ materially from current expectation. Readers are cautioned not to place undue reliance on these forward-looking statements, which speak only as of the date of this press release. The Company disclaims any intention or obligation, except to the extent required by law, to update or revise any forward-looking statements, whether as a result of new information, future events or otherwise.