Commenting on the drilling program, Greg McCunn, Chief Executive Officer, said: “The drilling program at Tontokrom continues to deliver exceptional results, clearly demonstrating this deposit has encouraging widths of mineralization and grade in multiple parallel zones. With the deposit still open along strike, Tontokrom has the potential to become a bulk tonnage, open pit source of ore feed for the existing milling operations at the AGM.  As a result of the success, we have decided to expand the Phase 1 program to test the length of the strike along the southwest.

Once the additional Tontokrom drilling has been completed, we expect to start the 5,000 meter drilling program at the Fromenda target soon afterwards, which will seek to confirm the encouraging historic drill results over a strike of 600m.”

Tontokrom Target
The Tontokrom target is located approximately 10km south of the AGM processing plant on the Miradani Mining Lease, It is situated along the Fromenda shear structure, part of the prominent northeast southwest Asankrangwa structural corridor which hosts all nine of AGM’s gold deposits. The area is highly prospective and the site of numerous historic small scale and alluvial mining operations along multiple mineralized parallel structures along the 3km strike under investigation. Historical geochemical anomalies are coincident with the targets, and primary and secondary structures known to control mineralization in the belt have been interpreted from the airborne VTEM and magnetic surveys and extensively mapped on the ground.

Phase 1 Drill Program – Tontokrom Target
The Phase 1 drill program was designed to test the 320m strike length of the existing artisanal pit. The 3,140m program consisted of 12 holes pre-collared to various depths with reverse circulation (“RC”) drills and completed with HQ diamond drilling. Drill holes were set back from the pit edge resulting in longer holes than would normally be drilled in an initial drilling program. Of the 12 holes completed in the program, nine were drilled to their intended depth and three were abandoned due to poor down hole conditions before reaching their intended targets. Sample results have been received for all drill holes (refer Table 1).

The Phase 1 drilling has delineated a strongly mineralized zone hosted within hydrothermally altered sedimentary and granitic host rocks. Mineralization encountered to date is over an approximate 250m strike length, a 250m vertical depth and over a total width of up to 120m horizontal. Mineralization is hosted in wide zones of brittle deformation and alteration with individual true widths of individual mineralized domains within the greater mineralized envelope of up to 50m wide.

Mineralization remains open to the southwest along the structural trend of the shear zone, as shown by very encouraging results in hole TTPC19-006A. Similar to all other deposits in the Asankrangwa Belt, mineralization is hosted in brittle quartz carbonate veins emplaced within altered sedimentary and granite host rocks and is controlled by a series of anastomosing shear structures making up the Fromenda shear corridor. Initial interpretation from geophysics suggested that the mineralization is associated with structural intersections between major north-east trending shears and conjugate east-west faults.  Mineralization appears to be dipping steeply to the north west and plunging to the north. This interpretation is supported by the lack of economic intercepts in TTPC19-003 drilled furthest to the northeast.

Mineralization at Tontokrom is encouraging, with economic intercepts being encountered in eight of the nine drill holes that reached their intended targets. The Phase 1 drilling program has now been expanded to include six additional holes to test the continuity of mineralization a further 250m along strike to the southwest. This program is expected to commence imminently.

A photo accompanying this announcement is available at http://www.globenewswire.com/NewsRoom/AttachmentNg/5daf6009-2cf9-4739-8b4a-b0fbeb438856

Table 1: Summary of Significant intercepts from the Phase 1 drill program*

Fromenda Target
The Fromenda Target is located approximately 10km further southwest of the Tontokrom Target along the same highly prospective Fromenda Shear Corridor. Results from historic drilling were positive and identified mineralization. A 5,000m drill program has been designed to confirm the mineralization as well as to step out along strike and to depth. This is expected to commence after the Phase 1 drilling program at Tontokrom has been completed.

QA/QC
Drill samples are being analyzed at the Intertek Laboratory in Tarkwa, Ghana by 50g fire assay. Initial observations indicate some coarse gold component and follow up screen fire assay analysis is being considered. Intervals are calculated using a 0.3 g/t cut-off and three metres maximum internal dilution. Reposted widths are drilled intervals and true widths vary depending on drill orientation and are not fully understood at this time. Assay values are uncut.

Qualified Person Statements
Benjamin Gelber (P.Geo), Group Geology Manager, is the Asanko Qualified Person, as defined by Canadian National Instrument 43-101 (Standards of Mineral Disclosure), who has approved the preparation of the technical contents of this news release.

About Asanko Gold Inc.
Asanko’s flagship project, located in Ghana, West Africa, is the jointly owned Asanko Gold Mine with Gold Fields Ltd, which Asanko manages and operates. The Company is strongly committed to the highest standards for environmental management, social responsibility, and health and safety for its employees and neighbouring communities. For more information, please visit www.asanko.com.

Forward-Looking and other Cautionary Information

Neither Toronto Stock Exchange nor the Investment Industry Regulatory Organization of Canada accepts responsibility for the adequacy or accuracy of this release.

Photos accompanying this announcement are available at: 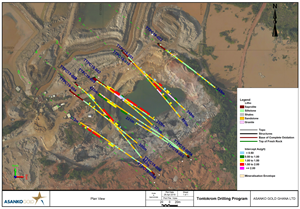 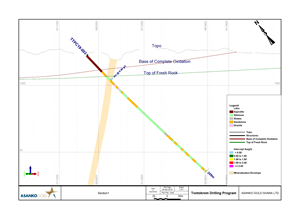 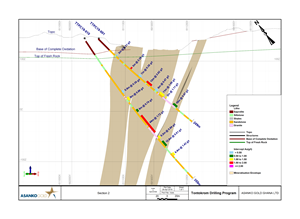 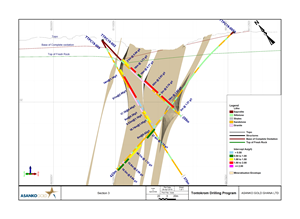 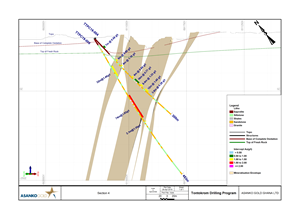 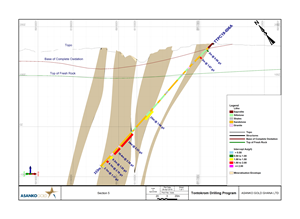