VANCOUVER, BC, Dec. 7, 2020 - District Metals Corp. (TSXV: DMX) (FRA: DFPP);("District" or the "Company") is pleased to report additional results from the final airborne electromagnetic ("EM") and magnetic data that covers the entire 5,144 hectare Tomtebo Property located in the Bergslagen Mining District in south-central Sweden.  A detailed heliborne SkyTEM survey comprising approximately 600 line-km was flown at 100 m line spacing in July 2020, and geophysical interpretations were successfully completed by Condor Consulting and Geovista AB.
Garrett Ainsworth, CEO of District, commented: "We are very pleased with the SkyTEM results, and the application of this modern exploration method has undoubtably proven to be very successful. The recently flown survey has identified numerous conductive and magnetic high anomalies that showcases the exceptional potential to make additional polymetallic discoveries across the Tomtebo Property.
Our last step before drilling anticipated in Q1 2021 will include a targeted ground gravity survey over the Tomtebo Mine Trend which will start shortly and help us refine and prioritize existing targets within this important trend."

The Tomtebo Mine was picked up as high priority target zone 7 where coincident electromagnetic (EM) and magnetic high responses have been identified.  The EM anomalies are present within the late time gates, which indicates strong conductivity that likely correlates with the copper-gold dominant sulphide mineralization at the mine.  Additional EM anomalies are also seen east of the Tomtebo Mine, and on the flanks of a significant magnetic high anomaly.

The Lövås Mine is within high priority target zone 24, which comprises a north to south oriented magnetic high feature that is associated with a limestone/marble unit that has been partially replaced by iron and polymetallic sulphides.  Electromagnetic (EM) anomalies are also present along three survey lines around the Lövås Mine with two of the EM anomalies within the significant north-south magnetic anomaly.

One of the single peak EM anomalies was modeled for drill targeting, and shows a steeply dipping body of moderate conductivity with significant thickness.  The modeled conductor has a near surface strike length of 150 m, thickness of 25 m, and vertical extent of at least 300 m.

The high priority Skallerberget target is at the south end of target zone 24, and comprises a conductive anomaly that is observed approximately 500 m south of the Lövås Mine and within the same magnetic high anomaly as Lövås.  The EM anomaly at Skallerberget is weakly to moderately conductive, and is located proximal to the historic Skallerberget Iron-Lead Mine.

The EM anomaly at the Skallerberget target has been modeled as a steeply dipping weak to moderate conductor. The anomaly is a single peak and is explained by a body with significant thickness.  The modeled conductor has a near surface strike length of 125 m, thickness of 27 m, and vertical extent of at least 200 m.

The Källberget target is at a medium to high priority that comprises target zones 21 and 22.  Conductive anomalies at Källberget are seen along a trend that strikes for approximately 700 m.  The Swedish Geological Survey mineral occurrence database reports several historic small mines and mineral occurrences in the area (Moren 1, 2, 3 and Flatåsen 4) that are associated with copper- and iron-sulphides. The EM anomaly trend consists of weakly to moderately conductive anomalies.

A single EM anomaly was chosen for plate modelling within the 700 m long conductive trend at Källberget. The trend is expected to be of lower conductivity on most of the other profiles where it has been defined. The modeled EM anomaly is explained by a steeply dipping body of moderate conductivity with a near surface strike length of 200 m, thickness of 30 m, and vertical extent of at least 400 m.

The medium priority Kvistaberget target comprises target zone 26.  Kvistaberget consists of a single peak EM anomaly that is located on a topographic high.  The Swedish Geological Survey mineral occurrence database reports a historic small mine (Kvistaberget 4) with copper- and iron-sulphides (chalcopyrite and pyrrhotite) that is associated with the EM anomaly. There are several other sulphide occurrences within a few hundred meters of the Kvistaberget EM anomaly, however, none of them have any associated EM anomalies. The decay rate for the conductive anomaly at Kvistaberget indicates moderate conductivity.

The EM anomaly at the Kvistaberget target has been modeled as a steeply dipping weak to moderate conductor. The data fit is better for a body with a large down-dip extent, but this parameter is not well constrained by the data.  The modeled conductor has a near surface strike length of 150 m, thickness of 20 m, and vertical extent of at least 400 m.

Next Steps at Tomtebo Property 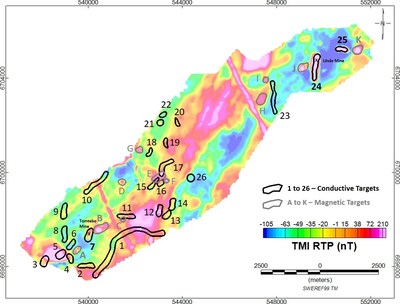 All scientific and technical information in this news release has been prepared by, or approved by Garrett Ainsworth, PGeo, President and CEO of the Company.  Mr. Ainsworth is a qualified person for the purposes of National Instrument 43-101 - Standards of Disclosure for Mineral Projects.

District Metals Corp. is led by industry professionals with a track record of success in the mining industry. The Company's mandate is to seek out, explore, and develop prospective mineral properties through a disciplined science-based approach to create shareholder value and benefit other stakeholders.

The advanced exploration stage Tomtebo Property, located in the Bergslagen Mining District of south-central Sweden, is the Company's main focus.  The Tomtebo Property comprises 5,144 ha, and is situated between the historic Falun Mine and Boliden's Garpenberg Mine located 25 km to the northwest and southeast, respectively. Two historic polymetallic mines and numerous polymetallic showings are located on the Tomtebo Property along an approximate 17 km trend that exhibits similar geology, structure, alteration and VMS/SedEx style mineralization as other significant mines within the district. Mineralization that is open at depth and along strike at the historic mines on the Tomtebo Property has not been followed-up and modern systematic exploration has never been conducted on the Property.

This news release contains certain statements that may be considered "forward-looking statements" within the meaning of applicable securities laws. In some cases, but not necessarily in all cases, forward-looking information can be identified by the use of forward-looking terminology such as "plans", "targets", "expects" or "does not expect", "is expected", "an opportunity exists", "is positioned", "estimates", "intends", "assumes", "anticipates" or "does not anticipate" or "believes", or variations of such words and phrases or state that certain actions, events or results "may", "could", "would", "might", "will" or "will be taken", "occur" or "be achieved" and other similar expressions. In addition, statements in this news release that not historical facts are forward looking statements including anticipated results of future exploration and the results of additional compilation work.

These statements and other forward-looking information are based on assumptions and estimates that the Company believes are appropriate and reasonable in the circumstances, , including, without limitation, assumptions about the reliability of historical data and the accuracy of publicly reported information regarding past and historic mines in the Bergslagen District  the Company's ability to raise sufficient capital to fund planned exploration activities, maintain corporate capacity and satisfy the  exploration expenditure requirements required by the definitive purchase agreement between the Company and the vendor of the Tomtebo property (the "Definitive Purchase Agreement") by the times specified therein (failing which the Tomtebo Property will be forfeited without any repayment to the Company); and stability in financial and capital markets.

There can be no assurance that such statements will prove to be accurate and actual results, and future events could differ materially from those anticipated in such statements. Important factors that could cause actual results to differ materially from the Company's expectations include the risk that historic data regarding the Tomtebo property is unreliable, the risk that information concerning production and mineralization at current and historic mines within the Bergslagen District proves to be inaccurate; the risk that the Company will be unable to raise sufficient capital to finance planned exploration (including incurring prescribed exploration expenditures required by the Definitive Purchase Agreement, failing which the Tomtebo Property will be forfeited without any repayment of the purchase price); future metal prices, general economic, market or business conditions, and other exploration or other risks detailed herein and from time to time in the filings made by the Company with securities regulators, including those described under the heading "Risks and Uncertainties" in the Company's MD&A for the financial year ended June 30, 2020.  The Company does not undertake to update or revise any forward-looking statements, except in accordance with applicable law. Readers are cautioned not to put undue reliance on these forward-looking statements.