VANCOUVER, British Columbia, Sept. 10, 2019 -- Chakana Copper Corp. (TSX-V: PERU; OTCQB: CHKKF; FRA: 1ZX) (the “Company” or “Chakana”), is pleased to announce that drilling has encountered an unexpected tabular body of mineralized breccia in close proximity to Breccia Pipe 5 (Bx 5). The body is very well mineralized, open and has important exploration implications to all the targets at Soledad. These results are part of Chakana’s fully funded 20,000m Phase 3 drill program at the Soledad copper-gold-silver project in central Peru.

There are twenty-three confirmed outcropping breccia pipes identified to date on the property (Fig. 1). Previous drilling at Bx 5 had outlined a mineralized, east-plunging breccia pipe to a depth of approximately 300m (see news release dated February 22, 2018, November 13, 2018, and January 10, 2019). Bx 5 is situated at the intersection of east and north-northeast trending structures. Two holes were drilled to test immediately east and down-plunge of the known breccia pipe from a step-out platform located 135m south-southeast from previous drilling at Bx 5 (Figs. 2 and 3). Both holes intersected long sections of mineralized breccia in a body that extends east and north of the known breccia pipe. These two holes returned 144m with 0.88 g/t Au, 0.88% Cu, and 13.6 g/t Ag in SDH19-126, and 172m with 0.29 g/t Au, 0.93% Cu, and 8.4 g/t Ag in SDH19-127. Important margin zone mineralization was also encountered in each hole, where grades are significantly higher. Assays are pending from a third hole (SDH19-128) that was drilled into the zone from a platform to the north (Fig. 3). Additional drilling is planned to follow this high-grade zone to depth.

“This is a significant development in the understanding of mineralization around Bx 5. The orientation of the breccia zone plunges to the north and is open at depth. While previous drill results on Bx 5 were favorable, this new zone has higher grades and has mineralized margin zones, something we have not seen since drilling at Bx 1. It may indicate that this new zone is a separate blind breccia pipe that intersects the breccia pipe that crops out at surface. Alternatively, we could be seeing zoning to higher grade copper with depth,” said President and CEO David Kelley. “These results indicate the importance of continued drilling once a favorable structure has been discovered. Breccia pipe mineralization at Soledad is zoned both vertically and horizontally, blind pipes exist, and high-grade domains are important,” added Kelley. Examples of mineralized breccias from holes in this release are shown in Figures 4 and 5.

Mineralized intervals from Bx 5 East include:

Reported mineralized intervals are not true widths given the vertical nature of the breccia pipe and the steep inclination of the holes.

Mineralized intervals from Bx 6 include:

Four drill holes were completed in the Bx 3W target in the north central part of the property (Fig. 1). Significant breccia was encountered with quartz-tourmaline-pyrite but without significant grades. Another hole was drilled to the southeast in order to test a geophysical anomaly, encountering sericite-pyrite-altered intrusive rocks without significant grades. The relation of these altered intrusive rocks to the breccia mineralization is unknown at this time.

About the Phase 3 Drill Program

The Phase 3 drill program is planned for 20,000m to test a variety of targets on the expanded property and to complete additional definition drilling. Approximately 4,300m of drilling has been completed since the start of the Phase 3 program. Based on extensive surface exploration work completed since Phase 2 drilling, a total of 92 targets have been defined and ranked. Targets are categorized as 1) outcropping breccia (n=45), 2) inferred breccia based on breccia float, geochemistry or geophysics (n=39); and 3) non-breccia or intrusive-hosted mineralization and polymetallic vein occurrences (n=8). Of these targets, 23 are tourmaline breccia pipes, and 12 others are areas possessing the alteration characteristic of the halo proximal to known breccia pipes. The strategy is to drill approximately 750m into each target in accordance with permitting and ranking criteria to further determine if closer-spaced drilling is justified.

Chakana follows rigorous sampling and analytical protocols that meet or exceed industry standards. Core samples are stored in a secured area until transport in batches to the ALS facility in Callao, Lima, Peru. Sample batches include certified reference materials, blank, and duplicate samples that are then processed under the control of ALS. All samples are analyzed using the ME-MS41 (ICP technique that provides a comprehensive multi-element overview of the rock geochemistry), while gold is analyzed by AA24 and GRA22 when values exceed 10 g/t. Over limit silver, copper, lead and zinc are analyzed using the OG-46 procedure. Soil samples are analyzed by 4-acid (ME-MS61) and for gold by Fire Assay on a 30g sample (Au-ICP21).

Results of previous drilling and additional information concerning the Project, including a technical report prepared in accordance with National Instrument 43-101, are made available on Chakana’s SEDAR profile at www.sedar.com.

David Kelley, an officer and a director of Chakana, and a Qualified Person as defined by NI 43-101, reviewed and approved the technical information in this news release.

ON BEHALF OF THE BOARD

For further information contact:
Michelle Borromeo, Manager – Corporate Communications
Phone: 604-715-6845
Email: This email address is being protected from spambots. You need JavaScript enabled to view it.

Neither TSX Venture Exchange nor its Regulation Services Provider (as that term is defined in the policies of the Exchange) accepts responsibility for the adequacy or accuracy of this release. 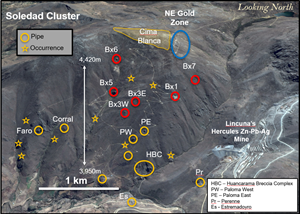 View looking north showing breccia pipes and occurrences within the Soledad cluster. Pipes that have been drilled are shown in red. Additional breccia pipes not shown occur in the Compañero cluster on the south half of the property.
Figure 2 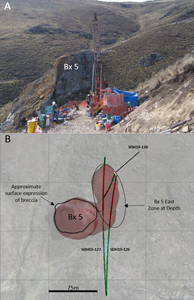 A) View looking east at drill set up for SDH19-112 on Bx 5; B) Map showing drill holes with geology discussed in this release. Black line shows approximate surface expression of breccia based on outcrop and float mapping. Dashed line shows general footprint of Bx5 East zone from recent drilling.
Figure 3 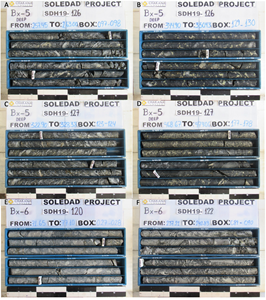 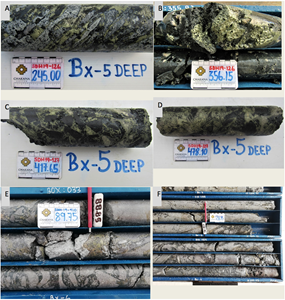 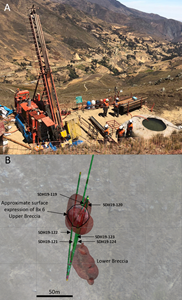 A) View looking southwest at drill set up for step-out drilling at Bx 6; B) Map showing drill holes with geology discussed in this release. Black line shows approximate surface expression of breccia based on outcrop mapping.
Figure 7 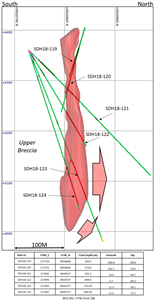